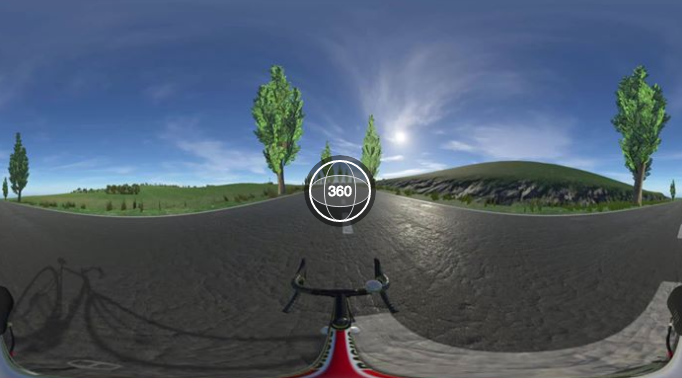 https://www.facebook.com/robkay/videos/10154380888596603/
Ever wanted to capture the view from a Pegasus? Record for posterity the moment you cross the finish line? Replay a spree of mech-versus-tank mayhem that made you cackle with glee? Thanks to our latest update, you can now record 360° video from VirZOOM Arcade and share your experience with the world.

What is a 360° video? In case you haven’t seen any yet, a 360° video is one that’s been recorded in such a way that the viewer gets to control where the camera looks. If you’re viewing one on a web browser, you click/tap and drag around the video to look around. If you’re viewing on a phone, like with the Facebook app, you can tilt the phone to look around. And if you’re viewing from a mobile phone with VR capability, you can use a built-in viewer like Samsung VR on Gear VR, or a free app like Skybox on Daydream.

To start recording while you’re playing with a VirZOOM bike on PC, on your left-hand handlebar controls, press the left arrow (←), and then the down arrow (↓). If you’re using a handheld controller, use left d-pad, then down d-pad. When you’re done recording, hit the same buttons again. (Recording 360° videos from VirZOOM Arcade is currently only possible on PC, not PS4.) Both video and audio will be captured.

Your movie will be located in a “Gallery” folder, appearing automatically after you finish recording, in the same folder as your VirZOOM executable file – most likely C:\Program Files (x86)\Steam\steamapps\common\VirZOOM.

Videos are most comfortable when you’re purposeful about how you record them, doing your best to avoid triggering simulator sickness. Le Tour gameplay on a relatively straight line is great, but Winterstan gameplay where you spin around constantly won’t do your audience any favors. Some tips to remember:

Also, heads up: Videos are captured at 20 frames per second, and your framerate will drop a bit while you record in VirZOOM Arcade. The kinder you are to your audience, the kinder you’ll be to yourself!

Tag us in your posts! If you post to Facebook or YouTube, don’t forget to let us know! We’re looking forward to seeing how you get around.