To Go or Quest? 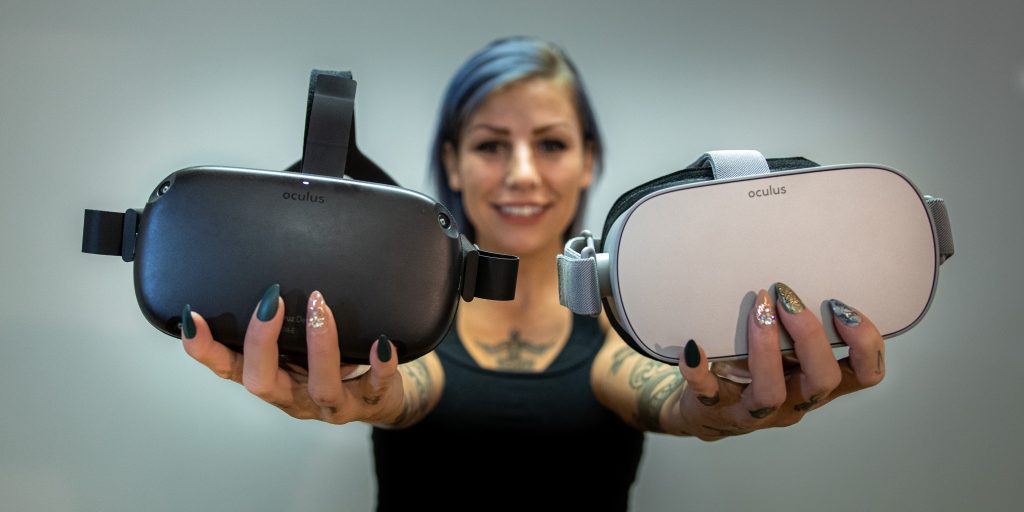 VZfit runs on the Oculus Go and Oculus Quest all-in-one VR headsets. They are both much more convenient and affordable than older systems, and have many unique improvements. If you don’t have one yet, here’s more information to help you choose!

In VR the world is all around you in 3D, and moving through it is your primary motivation in VZfit. Oculus (now owned by Facebook) pioneered the modern VR headset. Their first commercial version was called the Rift and required wires connecting it to a high-powered PC, a camera tracking system, and power outlets. The total cost of such a system was around $1500.

Oculus then produced the GearVR headset as an add-on for high-end Samsung phones. It didn’t require wires or cameras, but you had to insert and remove the phone for each use, and their combined price was still around $1000. It also didn’t have the Rift’s “position tracking” ability, which allows you to change perspective on the virtual world by moving your head around, and touch things in 3D space with hand controllers. Another difference was a screen refresh of 60 hz, which is less smooth than the Rift’s 90 hz.

Last year Oculus created their first all-in-one headset, called the Go for just $199. It essentially combines GearVR with an internal processor into a single comfortable package, with a better screen and optics than most PC systems, built-in stereo sound, and a friendly VR interface. Its headset feels light with elastic straps on the top and sides, and has an easy to clean and replace foam liner. It comes with a single hand controller that can point at things, but not touch them. The Go is suited to games with simple interactions and media applications with 360 degree videos or large virtual screens (including Netflix).

This year Oculus released the Quest, their high-end all-in-one headset for $399. It adds position tracking for the headset and two hand controllers like the Rift, but is entirely wireless and easier to setup. It also has a more powerful processor than the Go, to be able to draw more details, and a smoother screen refresh of 72 hz. Battery life is about the same as the Go at 2-3 hours per charge. A relative downside is that it’s a bit heavier than the Go. The Quest was made for games that take full advantage of VR, but with portability akin to a Nintendo Switch.

VZfit Play and Explorer provide the same gameplay across the Go and Quest. They run smoother at 72 hz on the Quest versus 60 hz on the Go, and some games have improved looks on the Quest. The main difference is how you steer in VZfit with each headset. On the Quest you steer like on a bike, by leaning a little to the left or right, which we measure from your head position. On the Go we use your head “tilt” instead of position, which feels natural since many people tilt their head when they lean, but means you need to keep your head upright when looking around to avoid steering accidentally.

We would recommend the Quest to families with gamers, or if you want higher-quality VR due to its position tracking and faster screen refresh. We would recommend the Go if you’re a traveler because of its light weight and instant setup, for use in hotel gyms and watching big-screen movies. Note that a complete VZfit exercise system with either VR headset, a stationary bike, and Sensor Kit will run you about half what Peloton and Zwift cost, for a futuristic experience you can have today at virzoom.com!