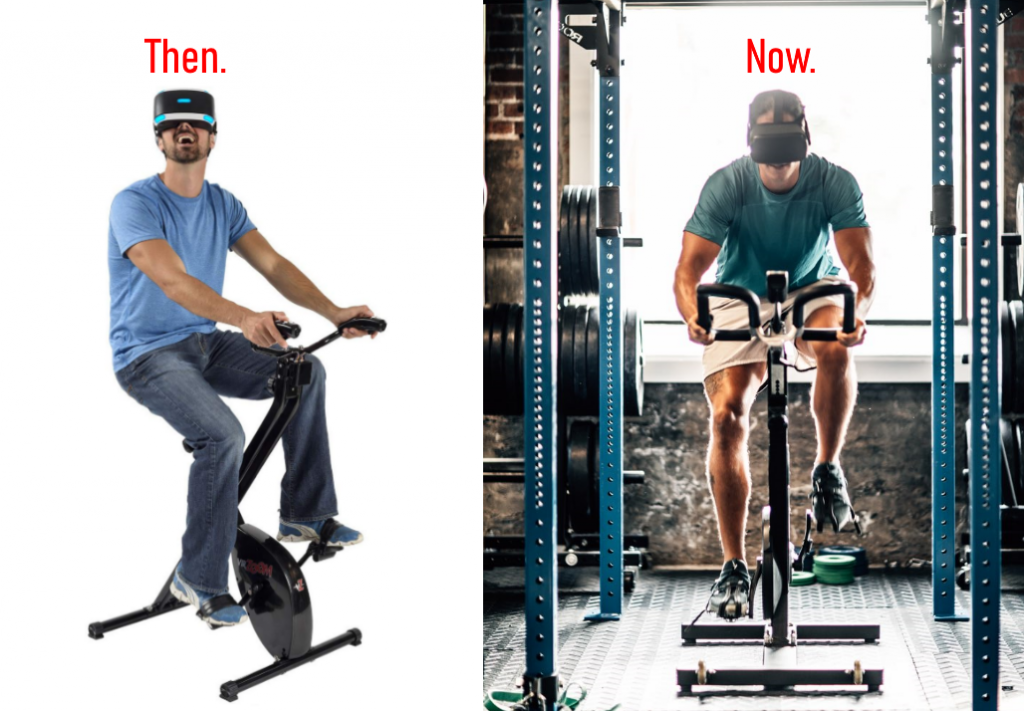 This post describes VZfit for original VirZOOM users curious about making the switch.

If you have an original VirZOOM Bike or Sensor, you only need an Oculus Go or Quest to play VZfit. We couldn’t keep updating all the VR platforms we were on, and feel these headsets are the best for exercise.

VirZOOM Arcade has become VZfit Play, with changes to the games to better suit fitness routines and non-gamers. The game menu has become a full 3D world, where you can see avatars and their current upgrades, and select everything by gazing and a single button press. Every game has a video tutorial, and offers timed solo (10, 20, 30, or 45 minutes) and head-to-head play modes (except Jailbreak, River Run, and Gem Hunt).

The timed solo modes were made to meet people’s fitness routines, which are often budgeted by time. You also don’t break your rhythm by having to restart when you die, and other players can’t drop in to kill you. We redesigned all the games to have increasing “waves” of difficulty and scoring the longer you play, which wasn’t possible with the prospect of online drop-in, and gave us a way to replace dying by restarting a wave. Wave difficulty either caps out or adapts to your capability.

For online multiplayer, we converted drop-in/drop-out to head-to-head matches with a synchronized start and end so there’s a winner declared. The first player in plays in solo mode until the next player joins, at which point the match begins. This works great with two bikes at a gym and also with friends wanting to compete. We’ve also added voice chat to all head-to-head games.

The games from VirZOOM Arcade have been optimized to run smoothly on Go & Quest class hardware, which means you’ll see less details in some cases. Three games from the original have not yet been ported: Lotus Pond, Keep Flying, and Cali Rally. Cali Rally is on its way, and Lotus Pond will be next if we can speed up its AI logic. Keep Flying is not feasible now given the number of trees it needed. They also now use just one button for gameplay, for simplicity rather than performance reasons. For instance you use the right trigger to fire dust devils and lasso bandits in Jailbreak. The left trigger is only to dive in Pegasus or Heli on the Oculus Go, which can’t detect your forward leaning like the Quest.

VZfit includes an entirely new game called Explorer, where you ride around Streetview on routes we suggest or any location you pick, with an AI trainer that can lead you through different workouts. We deform the 360 images to appear as if you’re riding through them. It’s not as high-end as Google Earth VR, but has more detail at street level and runs well on mobile-VR class headsets. We’re working to add multiplayer and improve its city deformations now.

The HUD is now the same for all games, to include fitness statistics like time left, total spins, and rpms. On original VirZOOM Bikes we also show your heartrate, but don’t show or score anything related to resistance since our Sensors can’t measure that. You can also adjust your pedaling-to-virtual speed to best suit your workout, with a difficulty setting above the HUD, and lower the HUD for easier viewing with a Spin bike or limited neck mobility. Below the HUD is your game score and current wave, or distance left and percent complete for Explorer rides. All other feedback has been moved “in-game”, for instance your Pegasus power meter is along her back, and score multipliers are shown above Jailbreak bandits.

Leaderboards and challenges work differently in VZfit. The VZfit web portal has a stats page to see your progress in both Play games and Explorer rides. Your highest solo scores and head-to-head wins have leaderboards on there, and they are not reset every week. Friend challenges have become Events anyone can participate in, which accumulate player scores over their period, and sometimes offer prizes.

VZfit also has options for commercial use, such as a “guest mode” that treats each session user as anonymous unless they login, headset locking to Sensors for multi-bike locations, and Team support with custom Events. We’re working on a Kiosk mode with an always-powered and secured headset to replace our earlier PC-based units, which will be more affordable and easier to move around for businesses.

If you are interested in upgrading to VZfit, the last thing to know is its account is managed at vzfit.com/account rather than my.virzoom.com/account, and we have prepopulated and prelicensed a VZfit account for use with your original Bike or Sensor. Just follow these instructions!

PrevPreviousThis High Jump Olympian is Preparing for the 2020 Olympics with VZfit
NextLearn how this grandmother of 5 is getting active again with VZfit.Next